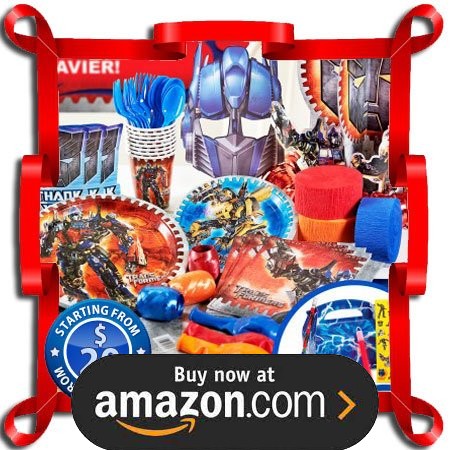 Transformers Party Supplies are based on Transformers: Revenge of the Fallen a.k.a. Transformers 2, a 2009 American science fiction-action movie. The film was produced by Steven Spielberg and directed by Michael Bay. The movie is the sequel to the 2007 film Transformers.

Sam Witwicky (Shia LaBeouf) finds a shard of the All Spark in the clothing. He accidentally touches the shard and it starts uploading its knowledge into his mind. Sam hands over the shard to his girlfriend Mikaela Banes for safekeeping. He also leaves his guardian Bumblebee behind.

Humans, along with the Autobots have created Network Elements: Supporters and Transformers (NEST). It is a joint military organization with the top elite soldiers on the planet. NEST is led by optimus Prime, Major William Lennox and General Morshower. Demolishor warns optimus of The Fallen’s return. Soundwave overhears the location of Megatron’s corpse and the presence of a shard of the Allspark and he sends Ravage to retrieve the shard. Ravage, the Constructicons and “The Doctor” resurrect Megatron with the salvaged shard. The Fallen orders Megatron to capture Sam and kill Optimus.

Wheelie tries to steal Mikaela’s shard but gets captured by her in the process. She locks Wheelie in a container and goes to meet Sam. Meanwhile, Sam meets Leo Spitz, who is his roommate and runs a conspiracy website. A Pretender attacks Sam and at the same time Mikaela arrives. Sam, Leo and Mikaela run from there but Decepticons capture them. They torture Sam to know about the whereabouts of the Matrix. Optimus and Bumblebee arrive there and fight with Megatron, Starscream, and Grindor. Grindor is killed in the fight, Starscream is injured but Optimus gets killed by Megatron. Bumblebee, Skids and Mudflap run away with the humans. The body of Optimus is extracted by the NEST team but later NEST is decommissioned.

The Fallen broadcasts a demand to Earth to deliver Sam to the Decepticons. Then the Decepticons kidnap Sam’s parents. Leo has a rival called “RoboWarrior” and Leo tells Sam that he could be of help. When they meet him they find that he actually is Agent Simmons from the Sector Seven. Simmons tells them that Transformers have been on Earth for a millennium. Then they are teleported to Egypt by the elderly Jetfire and he tells them the history of the Transformers.

Sam and his friends reach an ancient Egyptian temple in Petra and there they discover the Tomb of the Primes. But when Sam touches it, the Matrix crumbles to dust. Sam collects the sand in a pouch and takes it with him. A fierce battle begins between the Decepticons and the Autobots and NEST who are helped by the Egyptian and Jordanian military. Before being killed, Constructicon Devastator uncovers the Sun Harvester from a pyramid. In the end, the Decepticons ate wiped out and only Megatron and Starscream survive. Sam runs towards Optimus but is killed by Megatron. Before dying, Sam has a vision of the Dynasty of the Primes and is being told that the Matrix of Leadership is not a physical item; it is a right and he has earned it.

Sam comes back to life and the sand in Sam’s pouch forms itself into the Matrix. Optimus Prime is resurrected with the help of the Matrix. But The Fallen comes there and captures the Matrix to activate the Sun Harvester. The Fallen’s telekinesis wipes out the U.S. military forces. Jetfire sacrifices his Spark and parts and Optimus destroys the Sun Harvester. The Fallen is killed and Megatron is injured and retreats. Sam is thanked by Optimus who also records a message in his data bank that the Transformers and the humans share a common past. Sam returns to the college.

Transformers 2 was released on June 24, 2009. It was a box office success, and grossed $402 million in North America and $836 million worldwide. The movie was the second most successful film of 2009 (after Avatar).

Transformers Ultimate party pack is really the ultimate choice for your child and includes all the stuff that your child can dream of and more!

I’ve personally used Transformers Party Supplies for my kid’s birthday and through my personal experience I would recommend it to all Transformers lover kids.

Transformers on the ‘net