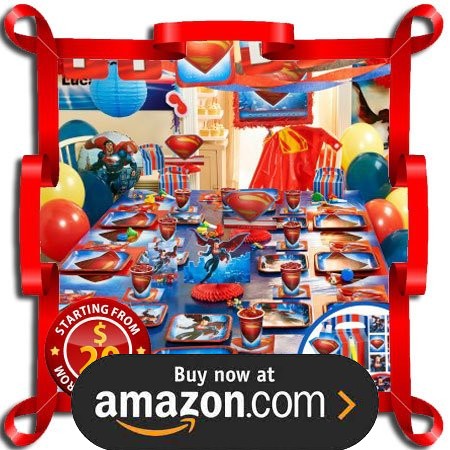 Superman Party Supplies are based on Man of Steel, a 2013 American superhero movie. The film is scripted by David S. Goyer, produced by Christopher Nolan and directed by Zack Snyder. The movie is based on a fictional character, Superman, originally created by writer Jerry Siegel and artist Joe Shuster in 1933 for DC Comics.

The movie stars Henry Cavill, Amy Adams, Kevin Costner, Diane Lane, Michael Shannon, Laurence Fishburne, Christopher Meloni, Russell Crowe, Antje Traue and Ayelet Zurer among others. Superman: Man of Steel premiered on June 10, 2013 in New York City and on June 14, 2013, it was released to the general public. The movie was released in conventional, 3D and IMAX formats. At the worldwide box office, the movie has grossed more than $593 million.

The plot of the film is very interesting. It is a story about how Carl becomes Earth’s greatest protector, Superman. The planet Krypton’s natural resources are depleting for years. Now, its core has become unstable and the planet is facing imminent destruction. During a military coup, the planet’s military commander General Zod and his followers depose the ruling council. Scientist Jor-El and his wife Lara know the fate of the planet and are afraid of Zod. So, they infuse the cells of their newborn son Kal-El with a genetic codex of the entire Kryptonian race and they launch him to Earth on a spacecraft.

Zod murders Jor-El but he and his followers are banished to the Phantom Zone after being captured. But after some time Krypton explodes and that sets them free.

Kal-El lands in a small Kansas town, Smallville. Farmers Jonathan and Martha Kent adopt and raise him. He is now Clark. Initially, Clark’s Kryptonian physiology confuse him, but he gradually learns to control his powers. He uses his superhuman abilities on Earth to help others. Jonathan reveals the secret to a teenage Clark that he is actually an alien. He requests Clark not to use his powers publicly because the society might reject him.

Clark is adult now. He is 33 years old, (in the present timeline of the film,) at least from the moment he was found. He is trying to cope with the loss of his adoptive father. He has lived a nomadic lifestyle for several years. He has worked different jobs under false identities. He has also been saving people in secret. In the Arctic, a U.S. military investigation of a Kryptonian scout spaceship is going on which he infiltrates. When he enters the ship, he finds that he is able to communicate with Jor-El’s preserved consciousness in the form of a hologram.

Jor-El tells him about his origins and the extinction of Kryptonian race. He also reveals that Clark was sent to Earth to bring hope to mankind. Meanwhile, a journalist from the Daily Planet named Lois Lane was sent to write a story on the discovery of the spaceship. She had been following Clark. She, too, sneaks inside the spaceship. But there she gets injured and Clark saves him. She submits her story of a “superhuman” rescuer, but her editor, Perry White, rejects her story. She decide to write an exposé and traces Clark back to Kansas. But when Clark tells her his story, she decides not to reveal his secret.

Meanwhile, Zod and his followers are seeking out other worlds that the Kryptonian race had colonized. But after Krypton’s destruction the colonies had not survived long. They pick up a Kryptonian distress signal. When they trace it down, they come to know that it was sent from Earth from the ship Clark had discovered.

Zod arrives to earth believing Clark has the codex. He demands the humans to surrender Kal-El otherwise he would destroy the Earth. Clark agrees to surrender. The military hands him and Lois over to Faora, Zod’s second-in-command. Zod intends to transform Earth into a new Krypton by using a terraforming “world engine”. Then, by using the codex he would repopulate the Earth with genetically-engineered Kryptonians. The process would result in the destruction of mankind.

With Jor-El’s help, Clark and Lois escape Zod’s ship. Clark convinces the military that he is an ally and defeats Faora and Nam-Ek. Zod initiates the process in Metropolis and over the Indian Ocean by deploying the world engine.

Clark is now being called “Superman”. He destroys the world engine deployed by Zod. The military initiates an aerial strike on Zod’s ship over Metropolis using the spacecraft that brought Carl to Earth. Their combined efforts send Zod’s forces back into the Phantom Zone. Carl destroys the ship which carries the Genesis Chamber, the main technology to restore the Kryptonian race with the codex.

Only Zod survives. Superman fights a destructive battle with him across Metropolis. In revenge for his defeat, Zod tries to murder cornered civilians, but Superman kills him.

In the present day, the U.S. government is still trying to uncover Superman’s secret identity. Superman is evading their efforts, while making efforts to earn the U.S. government’s trust. Clark takes a job as a reporter at the Daily Planet with the intention to create an alias that would give him access to dangerous situations without arousing suspicion.

Star Cast of the movie Superman: Man of Steel

I’ve personally used Superman Party Supplies for my kid’s birthday and through my personal experience I would recommend it to all Superman fans.

Superman on the ‘net