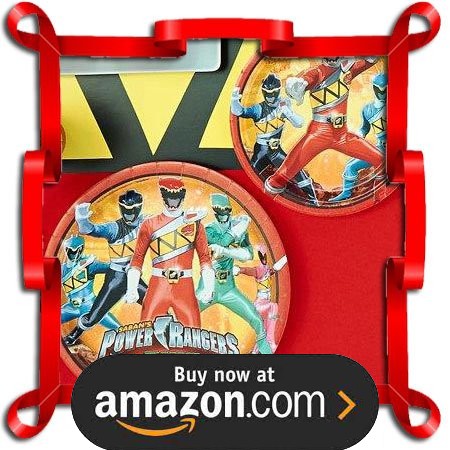 Power Rangers have been around forever. I should know, they have been around since I was young and that is quite a long time, though I won’t put my age out there. My son now loves watching the TV show and movies. He has all the collectables in his toy box, pajamas, his whole bed room is Power Rangers, and he knows all their colors from red, blue, green, black, and gold. He also lets his sister’s play with the pink and purple. He likes combining them to turn in to robots and dinosaurs. The favorite right now Power Rangers Dino Charge so the Power Rangers Dino Charge party supplies made his birthday theme and it was electrifying.

We started decorating the dining area with power Plates, cups, napkins, tablecloth, which were all great and it created an abundant atmosphere, Power Ranger type feeling that made the kitchen glow.

The birthday candle set was awesome, it came with four rangers making the cake stick out at the table, and his favorite Power Ranger was at the forefront, the Red Ranger. When the cake was ready, we had to set the table up and the table decoration kit that came with the Power Rangers Dino Charge party supplies kit was out of this world.

It was red with two center dinosaurs and about 20 confetti pieces were blending in. All the children gathered around as I set the table to the specifications of my son. He was going to sit by the Red Ranger and they were amazed at the transformation of everything.

Foil balloons and Power Ranger balloons were sweet. They lit up the front room, the entrance, and the back yard. We had plenty and yes, the temptation for the kids to grab the balloons was almost irresistible.

There was one balloon that stood out from the rest, a Giant Power Rangers Dino Charge balloon that was so exciting and now in his room. It was about five and half feet tall, much bigger than he was. He acted as if he was fighting that thing all day.

The banner kit was well worth the whole kit, we had it custom made with his name on it. We placed it right on top of the front entrance. That made sure that everyone could see from block to block. When it started getting darker, we placed lights pointed at the banner as if he was a Hollywood star.

Smashing the Piñata was next on the list, it was huge, and everyone loved it. I filled it to the brim with candies, Power Ranger mini gummi worms and I dumped the Power Ranger Dino charge mega mix that came with the pack into the piñata. Our eyes stuck like glue to the kids as they smashed and zeroed in on all the candies.

It was not Halloween but it sure felt like it was. Especially when everyone ran around in the masks and held tight to their 16oz, Power Ranger cups. The Power Rangers Dino Charge party supplies pack had tons of unique toys and everything we needed. Next year is around the corner and these party supplies will always be here for you and me, thank goodness for that.