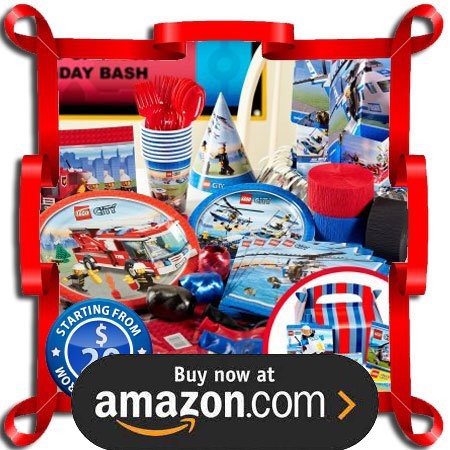 Lego Party Supplies are based on Lego, various construction toys manufactured by the Lego Group. The Lego Group is a privately managed company that is based in Billund, Denmark. Lego is the company’s flagship product and consists of colorful plastic bricks that interlock with one another. There are a lot of minifigures, gears and various other parts. There are many ways in which the Lego bricks can be connected and assembled and various objects like, buildings, vehicles etc. can be constructed. Even working robots can also be created with the help of Lego building blocks.

The Lego toys were originally designed in Denmark in 1940s and since then they have achieved an international appeal. There have been Lego movies, video games, games, competitions, and to top it all, four Lego themed amusement parks.

The Lego Group was started by a carpenter from Billund, Denmark. His name was Ole Kirk Christiansen and the group began his work in his workshop. He began making wooden toys in 1932. In 1934 he named his company, Lego, which means “play well” in Danish.

The company started making plastic toys in 1947. Lego began making the now famous interlocking bricks in 1949. The bricks were called “Automatic Binding Bricks” at that time. Actually, Lego had received a sample of Kiddicraft Self-Locking Bricks by a British supplier. The production of these bricks had started in 1947 in United Kingdom. Lego modified the design of the Kiddicraft brick and used cellulose acetate to manufacture the bricks. It was the time when the wooden toys were popular and the general thinking was that nothing could replace them. Many of the Lego shipments were returned due to poor sales.

When Ole’s son took over as the junior managing director of the Lego Group, he came up with the idea of a toy system. But the locking ability of the bricks was limited and were not very versatile. The modern brick design was developed in 1958 and the bricks produced from that year onwards are still compatible with the current bricks. Also the Lego sets made for teenagers are compatible with those made for young children.

Since 1963, acrylonitrile butadiene styrene (ABS) is used to manufacture Lego pieces. ABS is a strong, resilient plastic. Since then, Lego has released thousands of sets with a various themes, like, space, town and city, pirates, robots, Vikings, trains, dinosaurs, castle, wild west and undersea exploration.

Over the years Lego has released several licensed themes from cartoon and film franchises, like, Batman, Star Wars, Harry Potter, SpongeBob SquarePants, Avatar: The Last Airbender, Indiana Jones, Ben 10, Spider-Man, Thomas the Tank Engine, Toy Story, Speed Racer and Prince of Persia. But due to Ole Kirk Christiansen’s policy of not to make war seem like child’s play there are no military-themed sets in any line.

The largest Lego set ever produced is a 5,922 piece Taj Mahal. Next comes a minifig-scaled edition of the Star Wars Millennium Falcon. It was released in 2007, was designed by Jens Kronvold Fredericksen and has 5,195 pieces.

The programmable Lego brick that is at the heart of robotics sets has undergone several updates. The latest one is called the ‘NXT’ brick. It is sold under the brand name of Lego Mindstorms NXT 2.0.

Lego has introduced a number of videogames in the market including:

I’ve personally used Lego Party Supplies for my kid’s birthday and through my personal experience I would recommend it to all LegoVille lover kids.

Lego on the ‘net