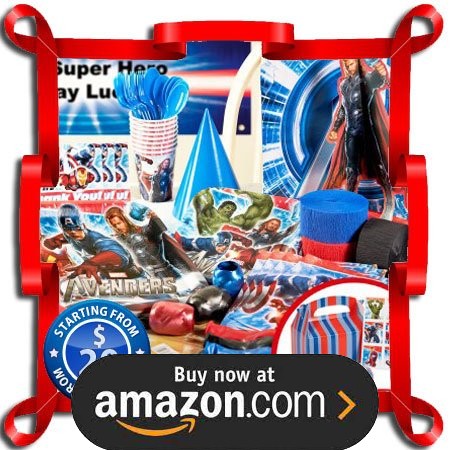 Captain America Party Supplies are based on Captain America: The First Avenger. It is a 2011 American superhero movie. The film is based on the character of Captain America from the Marvel Comics. The movie is written by Christopher Markus and Stephen McFeely. And it is directed by Joe Johnston. The movie stars Chris Evans, Hugo Weaving, Tommy Lee Jones, Hayley Atwell, Dominic Cooper, Sebastian Stan, Neal McDonough, Stanley Tucci, and Derek Luke.

The movie depicts the story of Steve Rogers. He is a frail, sickly young man from Brooklyn. He is transformed into super soldier Captain America by enhancing him to the peak of human perfection. This is done through an experimental serum. Now, he has to help the war effort by stopping Red Skull, Adolf Hitler’s ruthless head of weaponry.

Scientists uncover a circular object in the Arctic. It has a red, white and blue motif. Way back, in March 1942, Nazi officer Johann Schmidt and his army steal a mysterious tesseract from Tønsberg, Norway. The tesseract possesses untold powers. Steve Rogers is a sickly man who lives in New York City. Due to his health and physical issues, he is rejected for World War II military duty. He attends an exhibition of future technologies where he has come along his friend, Bucky Barnes. Here, Rogers re-attempts to enlist. Dr. Abraham Erskine had overheard Rogers’ conversation with Barnes where he talked about his willingness to help in the war, and he allows Rogers to enlist.

Rogers is recruited as part of a “super-soldier” experiment under Dr. Erskine, British agent Peggy Carter and Colonel Chester Phillips. Phillips does not think that Rogers is the right person for the treatment. But when he watches an act of self-sacrificing bravery performed by Rogers, he agrees for the treatment. Erskine discloses the fact to Rogers that Schmidt had also undergone the same treatment, but suffered side-effects as the procedure was imperfect at that time.

Schmidt and Dr. Arnim Zola are in Europe. They find success in harnessing the energies of the tesseract. They intend to use the energy to fuel Zola’s inventions. Schmidt discovers the location of Erskine and sends an assassin to kill him. Meanwhile, in America, Erskine is giving Rogers the super-soldier treatment by dosing him with “vita-rays” and injecting him with a special serum. After the completion of the procedure, Rogers becomes muscular and taller. But one of the attendees is Heinz Kruger, Schmidt’s assassin. Kruger kills Erskine, but Rogers chases and captures him. But Kruger uses a cyanide capsule to commit suicide before he could be interrogated.

With the death of Erskine the super-soldier formula is lost. U.S. Senator Brandt does not want to allow scientists to study Rogers to attempt to rediscover Erskine’s formula. So he sends Rogers on a nation-wide tour in a colorful costume as “Captain America”. He wants Captain America to promote war bonds. In 1943, when Rogers is performing for active servicemen in Italy, he learns that Barnes’ unit was lost in the battle against Schmidt’s army.

Rogers cannot believe that Barnes is dead and with the help of Carter and Howard Stark, he reaches the fortress that belongs to Schmidt’s HYDRA organization. He finds Barnes and frees him along with the other captured soldiers. Rogers confronts Schmidt who removes his mask to show him his real face, the Red Skull. Schmidt escapes from there and Rogers returns to base.

Rogers recruits Barnes, Gabe Jones, Dum Dum Dugan, James Montgomery Falsworth, Jim Morita, and Jacques Dernier to attack all the known HYDRA bases. Rogers and his team destroy various HYDRA operations successfully. They later attack a train carrying Zola. They capture Zola, but in the effort, Barnes falls off the train and dies. They extract information about the final HYDRA stronghold from Zola. Rogers attacks Schmidt to stop him from using WMDs on American cities.

The final fight takes place between Rogers and Schmidt in Schmidt’s jet. During the fight the tesseract’s container is damaged. Schmidt handles the tesseract physically and dissolves in a bright light. The tesseract falls burning through the plane on to the Earth. Rogers finds that there is no way to land the plane safely as there was the risk of the weapons detonation. So, Rogers crashes the aircraft in the Arctic.

Stark is later successful in finding the tesseract from the ocean floor, but is unable to locate the plane or Rogers.

Rogers awakens in an old-style hospital room. When he comes out, he finds himself at the present-day Times Square. Nick Fury tells him he has been “asleep” for around 70 years.

Invite the greatest army in history with our Captain America Party Supplies.

Captain America on the ‘net