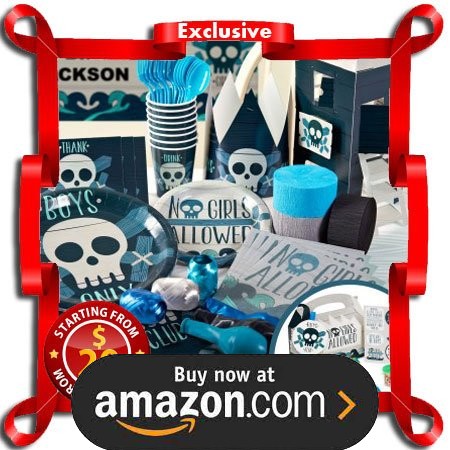 At some time or other, your son is going to decide that there are “No girls Allowed” in his birthday bash. If you’re supporting his idea and want to throw your little guy “Boys Only” bash,, but are worried about party supplies that match the theme of the party, don’t worry. We’ve got you covered. Presenting: Boys Only Bash Party Supplies!

But, before hosting a Boys Only birthday party, you’ll have to do some thinking. First of all, you’ll have to keep in mind what the boys the age of your little one like to do. For example, boys of age 5-9 love physical activities. So, if your birthday boy or his guests (friends) fall in this age group, you might want to include lots of physical activities that require strength, speed and agility.

Before planning for a Boys Only Bash Party, talk to your birthday boy if he has any place in mind where the party should be hosted. Ask him to prepare a list of his friends with their addresses that are to be invited. You’ll love the Boys Only Bash Invitations that come with Boys Only Bash Party Supplies. “You’re Invited” is printed on them. Between “You’re” and “Invited”, there is a pic of a pirate sword. And pirate means boys only, isn’t it?

Another good idea would be to host an all-nighter Boys Only Bash Birthday Party because boys love to spend the night with their friends. You may add a little note at the bottom of the invitation that the birthday party would be an all-nighter and they should bring a toothbrush, pajamas and sleeping bag to the party. Be sure to arrange a few things to do during the night like playing video games and playing movies. Also have some healthy snacks available for them to enjoy through the night, like, soda, popcorn, juice, fruits, pretzels etc. Be sure to order some extra 9 oz. paper cups from Boys Only Bash Party Supplies so that the boys may enjoy the liquids in style. The cups have a nice pic of a pirate skull with two swords in the background.

If you’re hosting a Boys Only Birthday Party, one of the games that they can play is the Treasure Hunt. Boys love to use flashlights and play in the dark. Arrange for a room that has no windows or you may use the basement or any other room that can be darkened. The room should be so dark that the boys are unable even to see their hands without the flashlight. Hand over each boy a a list of items they have to search, a flashlight and a pencil to mark off the items they have found. A time limit of 15 minutes can be set for the game.

Another great way to keep the birthday guests (boys) busy is to set up a backyard obstacle course. The items needed are hula hoops, apples, trash bags, lawn chairs, soccer ball and a stop watch. the hula hoops should be arranged in such a way that that the boys would have to jump through them, kick the soccer ball back to where the hula hoops start and sit down in the chair. There should be garbage bags that the boys have to use to hop to a table with apples. The boys have to take a bite of the apple and then the stop watch is switched off. The boy who takes the least time to complete the steps would be a winner. Many other steps can be included to set up the course. Like, stand on one foot and count to ten, crawl under a table, stand on a spot and do jumping jacks, touch balloons hanging from a tree branch etc, walk backwards ten steps etc. If the kids are early readers, you can add signs to tell what to do at each stop and they have to read and follow the instructions. It would be a reading practice in a fun way.

Birthday parties should be fun and not overly complicated. You just have to try to make the day as memorable as possible for the birthday boy and his friends. Boys don’t care about decorations, but with Boys Only Bash Party Supplies you get many items to decorate the room that the birthday boy would love and his friends would envy. For instance, there is an 18″ Boys Only Bash Foil Balloon which has a pattern of a pirate skull, two pirate swords and “Boys Club” printed on it. The other side of the balloon has the following text written on it:

Boys Only Bash Party Supplies include many other themed items for decorations, such as, centerpiece, 3 color balloons, 3 color curling ribbon Rolls, 3 color crepe paper, cake candles, paper crown hats and 18″ x 61″ personalized banner. The Boys Only Favor Boxes are filled with a lot of items that’ll keep the kids hooked, like, a Bottle of Bubbles, a Neon Icy Bounce Ball, a Small Noise Putty, Ring Pops Candy, a Glow Light Stick, Blowout and a Sticker Sheet. All the boys in the club will go home with some very special treats.

I’ve personally used Boys Only Bash Party Supplies for my kid’s birthday and through my personal experience I would recommend it to all Boys Only Bash lover kids.

Because – Boys Will Be Boys!

Boys Only Bash on the ‘net

Images for Boys Only Bash