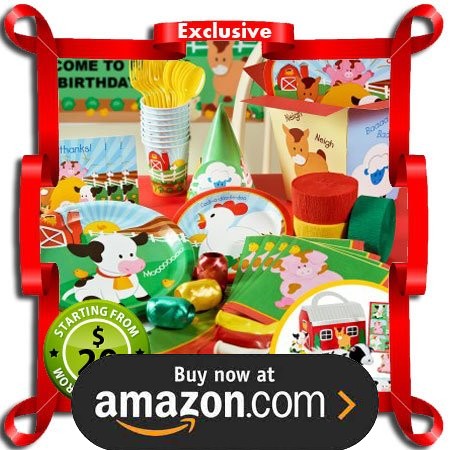 Barnyard Party Supplies are based on the 2006 computer-animated family comedy-drama movie, also called Barnyard: The Original Party Animals. The movie was produced by Nickelodeon Movies and Paramount Pictures, directed by Steve Oedekerk and was released on August 4, 2006. The main screenwriter of the movie is Steve Oedekerk and the voice over stars are Kevin James, Courteney Cox, Sam Elliott, Danny Glover, Andie MacDowell, and Wanda Sykes. The movie was later spun off into a TV series.

The storyline of Barnyard revolves around Otis, a handsome, carefree bull, but called cow in the film, who prefers to goof off, pull pranks and party than accept responsibility and be certain the farm is safe.

Ben, his father, is responsible for the barnyard when the farmer is away. He gives the animals the safest moment to spring up on two legs. All the time he tries to teach his son Otis to grow up as he is tired of Otis fooling around and he clearly tells him that he will never be happy if he just goofs off. He tells him that the day he found him alone in the meadow, the stars danced. But Otis ignores his father and prefers to party.

While Otis is partying, a pack of coyotes raid the chicken coop. The leader of the coyotes is Dag. Ben takes on them and saves the chicken, but while doing so, he is seriously injured. Otis is informed of the incident and he comes to his father, but Ben dies while trying to say something to his adopted son.

After the death of Ben, Otis is selected as a leader of the Barnyard. Otis is in love with Daisy, and while Otis is with Daisy holding her hand and looking at the stars, he hears sounds of coyotes chasing a rabbit. He tries to fight them, but because he is weak, Dag strikes a deal with him that they will kill animals here and there. Otis agrees and decides to leave the barnyard.

As Otis is leaving next morning he comes to know that Dag and his pack have killed one of Otis’ best friends, a chick named Maddie. He along with Pip, Pig, Freddy, Peck and Miles fight them and win the war. Before swinging Dag out of the Barnyard, Otis warns Dag and his pack of coyote to never return to their barnyard.

When Otis and his friends return to the barnyard, they come to know that Daisy has gone into labor and later she gives birth to a calf. The calf is named Ben after Otis’ father. Otis agrees to stay in the barnyard and be their leader. Everyone is happy. When Otis looks at the stars, he finds them dancing.

Give your little farmer a birthday hoedown to remember! Kick off their shindig with a country hoedown with Barnyard Party Supplies!

Paramount released the soundtrack on August 9, 2006 that included an original song by indie pop band the Starlight Mints, “You Gotta Move”. Also included was a song by alternative rock band The Almost.

Based on the movie, THQ and Blue Tongue Entertainment created an adventure game. The game can be played on PlayStation 2, Nintendo GameCube, Wii, PC, and Game Boy Advance.

A television series based on the film was released in September 2007. The series was named Back at the Barnyard.

If your child is one year old you should go with the Barnyard 1st Birthday Party Supplies that are specifically designed for one year old kids and they’ve got #1 printed on them.

If you’ve got a two year old kid you should choose with the Barnyard 2nd Birthday Party Supplies that are specifically designed for two year old kids and #2 is printed on them.

You also have a special option to personalize your supplies with Barnyard 1st Birthday Personalized Party Theme. Just upload your favorite photo along with your personal message, select font, color and image options and your personalized Barnyard theme would be as unique as your child!

Barnyard on the ‘net