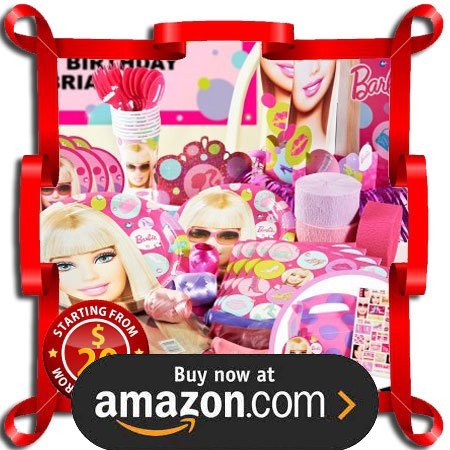 Barbie Party Supplies are based on Barbie, a fashion doll launched in March 1959 by the United State toy-company Mattel, Inc. Ruth Handler, an American businesswoman, was inspired by Bild Lilli, a German doll and created Barbie doll. For the last fifty years, Barbie has been prominently present in the toy fashion doll market and has been dominating it.

Although Mattel manufactures other brands of collectible dolls as well, Barbie is the leader brand of Mattel dolls and accessories. Barbie is loved all over the world but it has been subject to a lot of lawsuits and controversies as well.

Barbara used to play with paper dolls and her mother Ruth Handler used to watch her. Ruth noticed that Barbara used to give her doll adult roles and enjoyed it. It was the time when all the toy dolls were replica of infants. Ruth suggested her husband, Elliot, to start production of adult dolls. Elliot was a co-founder of the Mattel Inc. toy company, but both he and Mattel’s directors were unenthusiastic about the idea.

On her trip to Europe, Ruth Handler saw a German toy doll named Bild Lilli. It was a blonde bombshell doll made for adults, but was popular with kids as well. Its outfits that were available separately in the market and kids enjoyed dressing her up. Bild Lilli was inspired by Reinhard Beuthin’s popular character that appeared in a comic strip in the newspaper Die Bild-Zeitung.

Ruth Handler bought some of the Lilli dolls and when she returned back she and Jack Ryan (an engineer) started redesigning the doll. The new doll was named Barbie after Handler’s daughter Barbara. On March 9, 1959, at the American International Toy Fair in New York, the doll made its debut and this date is treated as official Barbie’s birthday. In 1964, Mattel acquired the rights to the Bild Lilli doll and production of Lilli was terminated.

The dress of the first Barbie doll was signature topknot ponytail and a black and white zebra striped swimsuit. There was choice of a blonde or brunette as well. Charlotte Johnson, a Mattel fashion designer, created her clothes. The clothes were hand-stitched by Japanese homeworkers, and the dolls were made in Japan. During the first year of production, around 350,000 Barbie dolls were sold.

According to an estimate more than a billion Barbie dolls have been sold worldwide till date in over 150 countries and as per the claim of Mattel three Barbie dolls are sold every second. Barbie’s looks has been modified many times, most prominent being in 1971 when the doll’s eyes were adjusted to look forwards (there was a demure sideways glance in the original).

The Barbie dolls and related accessories are manufactured on playscale size i.e. 1/6 scale. The height of the standard dolls is 11 1/2 inches.

Apart from dolls, their clothes and accessories, a large range of Barbie branded products are available in market, like, books, apparel, cosmetics and video games. Barbie is a supporting character in Toy Story 2 and Toy Story 3 and has appeared in a series of animated films.

Barbie has received some rare honors as well. A section of Times Square in New York City was renamed Barbie Boulevard for a week in 1974. Artist Andy Warhol created a painting of Barbie in 1985.

You may select Basic Party Pack from our Barbie Birthday Party Supplies which includes all the stuff you need for 8 guests. Or you may go with the Deluxe Party Pack from our Barbie Kids Party Supplies that has much more items than the Barbie Basic Pack. The Barbie deluxe pack is also for 8 guests. If you need favor boxes as well, I would suggest you to choose the combination of Deluxe Party Pack & 8 Favor Boxes from our Barbie Kids Birthday Party Supplies as it would cost you much more if you purchase them separately. If you think that the number of guests may exceed 8 you should consider Barbie Party Pack Add-On as it contains extra items for the extra guests. You may order Barbie Party Favor Boxes separately as well.

I’ve personally used Barbie Party Supplies for my kid’s birthday and through my personal experience I would recommend it to all Barbie lover kids.

Party with your favorite doll with our Barbie Party Supplies.

Barbie on the ‘net

Barbie™ Life in the Dreamhouse 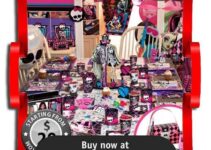 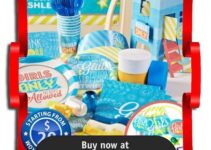 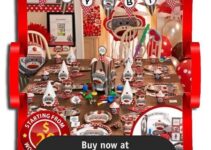