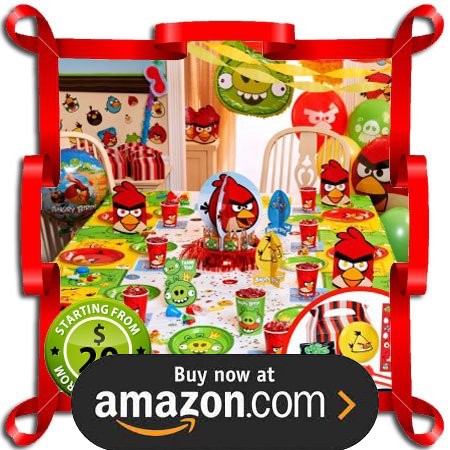 Everyone wants to enjoy at a birthday party. Kids love playing games at parties. Parents always have a hard time to decide about the games that they would arrange for the kids to play at the party. But, the good news is that for a Angry Birds themed birthday party, this is a no-brainer. Kids will play Angry Birds game. And they would love Angry Birds Party Supplies.

Green pigs have captured eggs of the birds. The birds are angry with the pigs. They want to destroy the pigs and retrieve back the eggs. Pigs are being sheltered by some structures so these structures should also be destroyed in order to hit the pigs.

How to play Angry Birds?

The target of the game is to destroy all the pigs on a field. Players use a slingshot to launch the birds with the objective of either hitting the pigs or the structures sheltering the pigs. The shelters are made of various stuff, like, stone, ice and wood. Types of structures changes with each level. Sometimes, explosive rocks and crates are also present in the shelters, which, when hit accurately, help in eliminating hard-to-reach pigs.

Like the birds, the pigs are also of different types. Small pigs are weak. They can be easily destroyed by direct hits. They can also be destroyed by the debris of the damaged shelters. Bigger pigs are relatively strong and can sustain more damage. Some pigs appear wearing helmets and they are able to sustain some damage. Some pigs wear crowns and they can take the most damage.

Each level has pre-determined number, order and types of birds. The level is considered as complete when all the pigs are destroyed before all the birds are used. The next level is unlocked only when the previous level is completed. Points are awarded for each pig defeated. The destruction of the structure or the damage to it also accrue points. If all the pigs are destroyed and the player has unused birds, more points are awarded. When a level is completed, depending on the score received, players receive one, two, or three stars.

The game is developed by Rovio Entertainment. It is a Finnish video and computer game developer company based in Espoo. The company was set up by Niklas Hed, Jarno Väkeväinen, and Kim Dikert. They were Helsinki University of Technology students. The game was first released in December 2009 for Apple’s iOS. The game met with huge success. Over 12 million copies of the game were sold. This led the company to develop versions for other touchscreen-based smartphones, Android phones in particular.

Angry Birds Seasons is a special Halloween edition of game that was released in October 2010. The game includes Halloween-themed graphics and music with new levels.

Angry Birds Rio was launched in March 2011. This version is based on Rio, a 20th Century Fox animated movie. The movie characters are also present in the game.

Angry Birds has been named as the fourth best iPhone game of all time by IGN in September 2010. UK Appy awards has named Angry Birds as “Best Game App” and “App of the Year” in April 2011. Angry Birds has won “Best Game for Handheld Devices” at the 15th edition of the Webby Awards.

Trivia (Use it to impress your birthday party guests):

Angry Birds Party Supplies come in various packages. Select as per your requirement.

Angry Birds on the App Store on iTunes